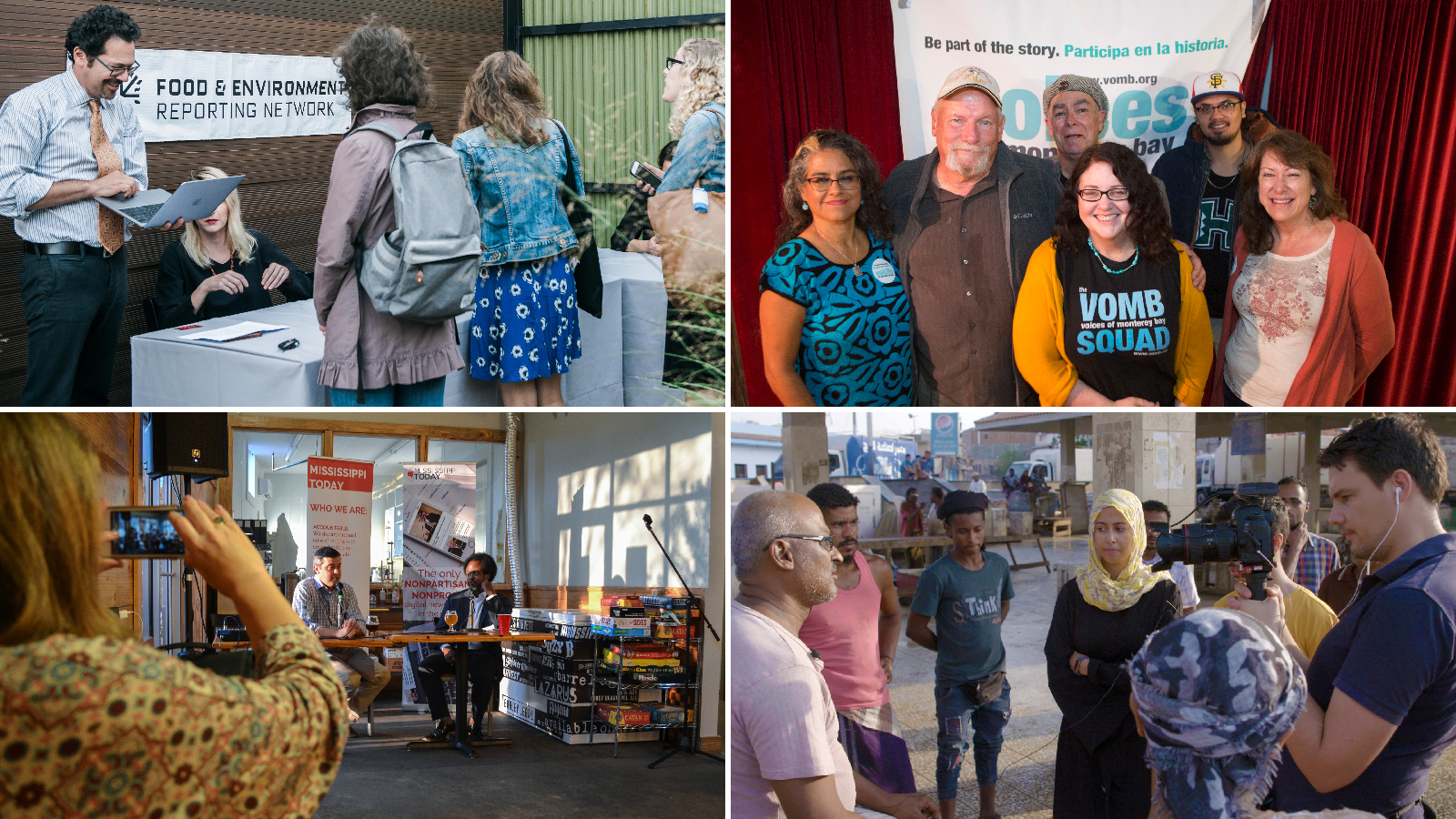 Washington, D.C. — NewsMatch, the largest grassroots campaign for nonprofit news, is uniting newsrooms around the country on Giving Tuesday as part of a nationwide #GivingNewsDay to support trustworthy journalism. The day is intended to drive as many donations to nonprofit news as possible to sustain quality journalism that keeps communities informed.

#GivingNewsDay will leverage the energy and momentum in the nonprofit community on Giving Tuesday to increase support for nonprofit journalism which covers vital issues facing our nation and local communities, from education to the environment to the economy. #GivingNewsDay is a chance for people to support the issues they care about and the journalists who report on them.

NewsMatch is doubling individual donations, up to $1,000, to 155 nonprofit newsrooms, each of which is eligible for up to $25,000 in matching funds through Dec. 31, 2018. Individuals can easily find and support trusted reporting in their community and on issues they care about at newsmatch.org. Donations are tax-deductible as allowed by law.

"We are thrilled to see the growth of this year's GivingNewsDay campaign and support its efforts to strengthen nonprofit journalism," said Asha Curran, Chief Innovation Officer at the 92Y’s Belfer Center for Innovation and Social Impact in New York City, the founders of Giving Tuesday. "As millions of people all across the world come together to bolster a myriad of nonprofit and philanthropic causes as part of Giving Tuesday, GivingNewsDay is an important reminder that quality journalism shines a spotlight on those issues every day."

“No matter what issue you are donating to on Giving Tuesday, there are nonprofit journalists who are reporting on those issues and they need your support too,” said Josh Stearns, Director of the Public Square Program at the Democracy Fund. “GivingNewsDay is a reminder that nonprofit news is part of making our world a better place through reporting that reveals injustice, seeks accountability, and helps find solutions.”

NewsMatch is an innovative platform for giving which combines individual donations with foundation and corporate support and long-term capacity building for news organizations. It is driven by the Institute for Nonprofit News and the News Revenue Hub, two organizations helping build more sustainable models for journalism in the U.S.. The campaign is supported by a diverse group of foundations and corporations including Democracy Fund, the Ethics and Excellence in Journalism Foundation, the Facebook Journalism Project, the Gates Family Foundation (through the Colorado Media Project), the John S. and James L. Knight Foundation, the John D. and Catherine T. MacArthur Foundation, the Jonathan Logan Family Foundation, the Wyncote Foundation, and additional supporting partners. The Miami Foundation serves as fiscal sponsor for the fund.

“NewsMatch is not just a fundraising campaign for nonprofit news organizations. It’s an opportunity to be part of a movement to build a strong future for quality, trusted journalism. By taking connected action on GivingNewsDay supporters can propel momentum and generate awareness around this important work,” said Karen Rundlet, Knight Foundation director for journalism.

Knight Foundation launched the inaugural NewsMatch in 2016, helping 57 nonprofit news organizations raise more than $2.4 million. In 2017, the campaign expanded to include a coalition of funders and helped support important coverage of a wide range of topics including education, immigration, conservation, local government and criminal justice. It raised $4.8 million for nonprofit news organizations, equipped them with professional fundraising, tools and technology and cultivated over 43,000 new donors.

Participating nonprofit news organizations are all members of the Institute for Nonprofit News and abide by guidelines of editorial independence and financial transparency.

Democracy Fund is a bipartisan foundation established by eBay founder and philanthropist Pierre Omidyar to help ensure that our political system can withstand new challenges and deliver on its promise to the American people. Since 2011, Democracy Fund has invested more than $100 million in support of effective governance, modern elections, and a vibrant public square. For more, visit democracyfund.org.

The Facebook Journalism Project was created in January 2017 to establish stronger ties between Facebook and the news industry. FJP is dedicated to ensuring high quality journalism thrives by delivering value through new products, partnerships with the news industry and programs. FJP works in three ways: collaborative development of new products; providing tools and trainings for journalists; and providing tools and trainings for people.

About the Gates Family Foundation

The Gates Family Foundation is a place-based philanthropy dedicated since 1946 to advancing long-term quality of life in Colorado, through support for educational equity, vibrant and sustainable communities, and stewardship of the state’s extraordinary natural resources. The Foundation has supported public and independent media for decades, especially as vital issues such as public education, rural issues, and natural resources have faced decreasing media coverage from commercial outlets. Gates also provides underwriting support for the Colorado Media Project, which aims to strengthen and accelerate sustainable, civic-minded journalism that meets the information needs of Coloradans in the digital age.

About the Institute for Nonprofit News:

The Institute for Nonprofit News is a network of more than 190 nonprofit, nonpartisan news media, together strengthening the sources of trusted information for thousands of diverse communities. INN was founded in 2009 to foster a new collective of newsrooms serving the public interest. Today it functions as an innovation network, helping members develop new ways to support journalism and engage communities, providing business, technology and leadership support and a framework for collaboration. INN’s work helps newsrooms bring investigative and civic news to more people, hold the powerful accountable and strengthen democracy.

About the John D. and Catherine T. MacArthur Foundation:

The MacArthur Foundation supports creative people, effective institutions, and influential networks building a more just, verdant, and peaceful world. MacArthur is placing a few big bets that truly significant progress is possible on some of the world’s most pressing social challenges, including over-incarceration, global climate change, nuclear risk, and significantly increasing financial capital for the social sector. In addition to the MacArthur Fellows Program, the Foundation continues its historic commitments to the role of journalism in a responsible and responsive democracy, as well as the strength and vitality of our headquarters city, Chicago. More information is available at macfound.org.

About the John S. and James L. Knight Foundation:

Knight Foundation is a national foundation with strong local roots. We invest in journalism, in the arts, and in the success of cities where brothers John S. and James L. Knight once published newspapers. Our goal is to foster informed and engaged communities, which we believe are essential for a healthy democracy. For more, visit knightfoundation.org.

About the Jonathan Logan Family Foundation:

Founded in 2016 and based in Berkeley, CA, the Jonathan Logan Family Foundation supports organizations that advance social justice by promoting world-changing work in investigative journalism, the arts, the environment, education, equity and inclusion and documentary film.

About the Ethics and Excellence in Journalism Foundation:

Founded by Edith Kinney Gaylord, Ethics and Excellence in Journalism Foundation’s mission is to invest in the future of journalism by building the ethics, skills and opportunities needed to advance principled, probing news and information. For more, visit journalismfoundation.org.

About The Miami Foundation:

Since 1967, The Miami Foundation has used civic leadership, community investment and philanthropy to improve the quality of life for everyone who calls Greater Miami home. We partner with individuals, families and corporations who have created more than 1,000 personalized, philanthropic Funds. Thanks to them, we have awarded over $250 million in grants and currently manage more than $300 million in assets to build a better Miami. As the Foundation marks our 50th anniversary, we are celebrating great Miamians who have championed what matters to them, encouraging all residents to share their Miami stories and unite around the causes they care about. For more, visit miamifoundation.org.

About the News Revenue Hub:

About the Wyncote Foundation:

The Wyncote Foundation, based in Philadelphia, was founded in 2009 with funds from the Otto and Phoebe Haas Charitable Trusts, at the direction of John C. Haas. Its mission is to support efforts that strengthen and enrich culture, community and the natural environment. Wyncote’s Public Media & Journalism program works to further a thriving public media ecosystem that is vital to animating and sustaining democracy’s public sphere. Learn more at wyncotefoundation.org/public-media-journalism.